Paris was intense place to visit. It has so much activity day and night, so much to see, so many tourists! It was amazing to me to be downtown until late at night, take the subway home at midnight and still have it feel very safe, packed with tourists and workers. This is a photo I took at Versailles where I spent a solid day walking and looking: 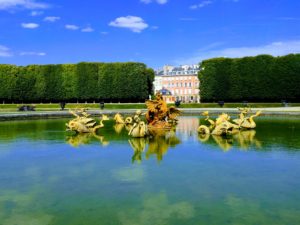 I think my best memories are of the evening events, sunset boat cruise with Veronik, walking tour with my new friend, Susan and her son Cole and an evening walk through the left bank with Nathalie. Susan and I met through a Facebook group for women travellers 35+. She and I both graduated from Cal Poly and she still lives in San Luis Obispo, so we had some things in common in addition to being in Paris at the same time. This is photo of Vironik and I on night cruise and one of me on walking tour. 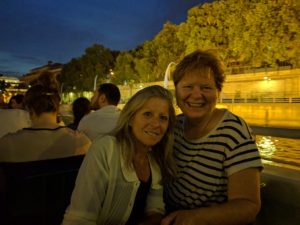 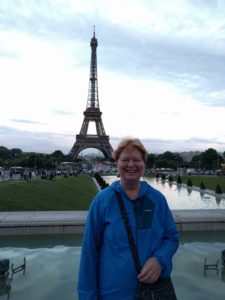 I was able to connect with my friends from Findhorn again. My findhorn roommate, Nathalie, and I both met for a wonderful evening walk and dinner on the left bank, but then had a great Sunday hike and picnic in the Fontainebleau Forest, about an hour outside of Paris. From the top point we could see only forest. Nathalie has just been certified as Reiki III, so I even got a Reiki treatment on a lovely rock near a Druid’s cave. It threatened rain the whole time, but didn’t start until we were back at the car. 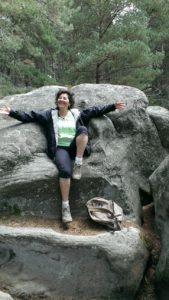 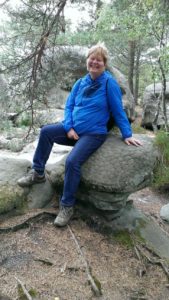 Lionel and I had a Japanese lunch and discussed the unintended consequences of how secrecy can interfere with healing and how the way we are structured is so different than it used to be when a doctor or healer would live with and treat their village. They knew the families, been in the house, were all integral in the community, illness was usually impossible to hide and affected everyone. Now there is the separation of doctors and counselors from patients, medical records secret from all but other doctors, the short visits, the lack of home visits and frequently a lack of community support. Maybe the patient doesn’t tell their friends and family what is going on in addition, so are unable to process with them. We felt perhaps this lack of discussion and processing interfered with healing.

I decided to leave on Monday for England and the train fare had shot up to 403 Euro! That is probably four times what I expected. Turns out the Tour de France finished up on Sunday on the Champs de Elysee in Paris and the trains charge based on the traffic. Veronik reminded me about BlaBlaCar, a European ride share, along the lines of AirBnB, but for car trips. I had created an account and been verified back in January before I left. There is a verification process so people are who they say they are and are legit. I signed up for a ride in a four seat car with a Realtor who was driving from the South of France to visit his mother near Calais, but was willing to pickup Paris passengers. It only cost me 19 Euro! It was nice to meet him, his son and another woman who was returning home from Paris after a weekend. I imagine we will have BlaBlaCar one day soon in the USA. It makes sense to meet interesting people and share the cost.

I am very sensitive to artificially scented laundry products and candles. When I stayed last night in Dover at a B&B, they had washed all the bedding with some detergent I could not tolerate, so I had to strip the bed and pile everything covered with a clean blanket to keep from smelling it all night. Still had itchy eyes and congestion in the morning. After a period of time of being ok, I forget to inquire about people’s laundry soap for the bed linen. I pity small children that can’t chose or explain why they might not tolerate their bedding or their clothes if washed in some of these chemicals. People who are not sensitive frequently don’t understand the problem. Motel owners must, because I have not had a problem at a hotel in US or Europe.

This morning I abandoned my already paid online second night in Dover and am writing this from Birmingham. The amazing thing is I went online and chose this hotel thinking it was close to the train station, paid for it, then realized it wasn’t really walking distance. I was irritated with myself and got a taxi. However Edgbaston Palace Hotel is really an old palace converted to a hotel. I am sleeping in single room – probably servant quarters. They also have affordable laundry service, a Botanical Garden within a mile walk and amazingly a bus stop almost in front that takes me to Stourbridge tomorrow right near Dr. Helen Ford’s. So, I ended up with the perfect hotel and I didn’t even realize it. This is Edgbaston palace where I am sitting in the pub with my liter bottle of Still Spring water and Rugby game on TV to write this on wifi. 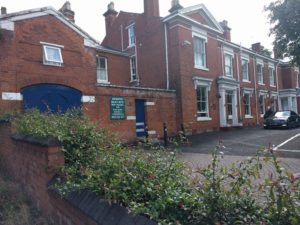 I am staying at Helen’s and then attending her seminar this weekend in Wales. She is teaching Aura diagnosis in what sounds like a beautiful natural area.

7 thoughts on “A long week in Paris”

"One of the nice things about working with Dr. Valeria is that she has so many tools at her disposal. She has helped me, not only with homeopathy, but also with dietary advice, and naturopathic suggestions. She is a caring physician and enjoys every patient."